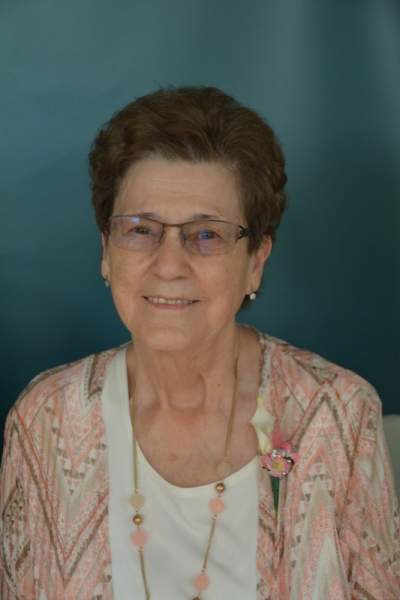 Rose Schmidt was born April 11, 1933 on her family farm, the daughter of John C. and Pauline (Miller) Schmidt. She was baptized and confirmed at St. Joseph Catholic Church in Dickinson. Growing up she attended country schools through the eighth grade. On November 6, 1951, Rose married Antone Wolf at St. Joseph’s Catholic Church. They were blessed with nine children, Duane, Keith, Tim, Bryan, Kelly, Sheryl, David, Rodney and Kenneth. The family was raised on their farm west of South Heart. Rose was a devoted mother and farmwife who kept a good hand on her children, teaching them many life lessons through the years. Rose milked cows twice a day for many years. She enjoyed her time in the barn and a glass of wine when the milking was done. Rose was the family barber when her children were young and every Friday was her day to go to town and get her hair done. She enjoyed flowers, playing cards, bowling, sewing and needlework.

Rose was a member of St. Mary’s Parish in South Heart and later St. Bernard’s Parish in Belfield. She was a member of St. Mary’s Altar Society. Rose and Tony moved off the farm and into Belfield in 1999. They lived there until she suffered her first stroke and then moved into Dickinson to be closer to her rehab. Together they enjoyed Evergreen. Following her second stroke, St. Benedict’s became her final home. Rose dearly loved her grandchildren and watching ‘Tom and Jerry’ with them, along with making them the best Coco Wheat Cereal without lumps . She will be remembered well and dearly missed.