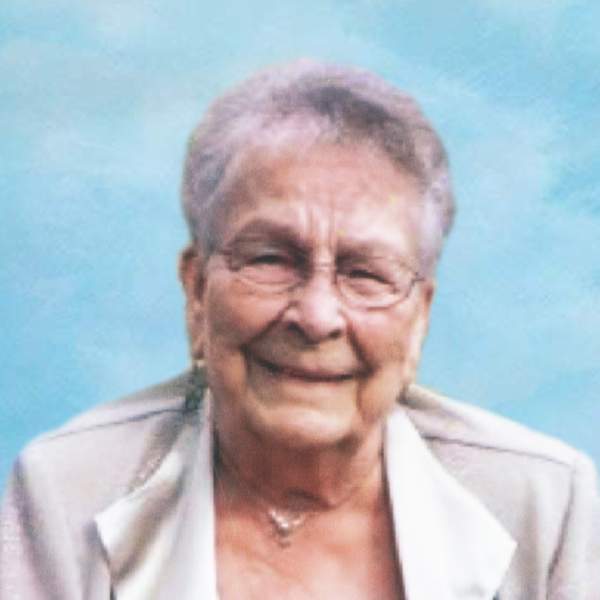 
Virginia Ruth Nielsen was born at a humble home near Shollsmade, ND September 20, 1930 to Constance Adeline (Sparlund) and Knud Nielsen. Growing up near her Grandfather’s farm and idolizing the house in which he lived, her childhood was heavily influenced by “the dirty thirties”. Her family subsided as farm laborers and as the farming industry succumbed to the weather, a move was made to Horicon, WI. There she and her brother were expected to herd cattle before and after school, and babysit her younger sister. Her memories included having only potato pancakes to eat, and modest Christmas gifts of new homemade pajamas and an apple. But World War II was looming, and Connie was intent to be near home if Knud was to be called to service. Therefore, a move back to New England was made, where Ruth assisted her mother with household chores and childcare for her two sisters while she and Connie worked outside the home; later Ruth worked side by side with her father on “the dray line”. Extended family and friends were important to her and her parents, so frequent visitors were welcomed with food and laughter. She graduated from New England Public High School. One day her father invited a young man over for dinner unexpectedly. So with perm curlers in her hair she fried potatoes for Edward Briske. They married February 14, 1952 in a private ceremony at her parent’s home while her friends drove around wondering what was happening at the Nielsen home. Shortly after a daughter, Mary Jane, was born, they moved to Long Beach, California where Ed worked in a furniture factory. That stay was short, and soon they moved back to the Briske family farm in North Dakota, then into the city of New England and birthed a son, Charles Edward. There she lived for most of her life until illness required her to stay with her daughter in Grand Forks, ND.


She was active in the community, participating in bowling leagues, TOPS, church circle, often holding office in those organizations. She was an accomplished seamstress, sewing her own clothes and clothes for her children. Crocheting was a lifelong hobby, having the ability to look at a pattern from a picture and produce a beautiful doily or tablecloth. She enjoyed many creative crafts and gardening. Hummingbirds with their colorful energy lifted her spirit. She had an adventurous gregarious nature and was always up for a country drive or trip to wherever. Weather and obstacles did not dissuade her from picnics in the badlands, or blocked roads to her sister’s for holidays. Her tenacity and conversation will be sorely missed.


Those who have gone before her include her husband Ed, parents Connie and Knud, sister Mae Lois Nielsen, and brother Charles Nielsen.