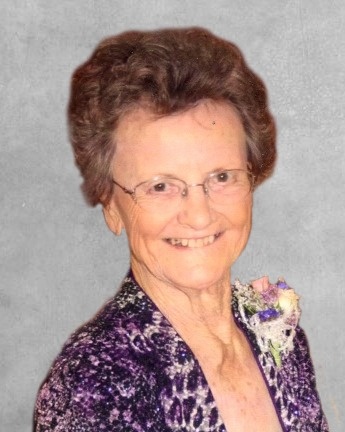 Funeral services for Ruth Deviney, 97, of Baker are pending with Stevenson Funeral Home. Previous service times have been postponed.

Ruth died the morning of Oct. 4th at her new home in Heritage Village in Mesa, AZ.

M. Ruth Deviney was born at home on her family’s cotton farm in McCurtain Co. Oklahoma. The closest town was Tom, which is the farthest town in SE Oklahoma.

Mamie Ruth Deviney and she wanted to be addressed as Ruth, was born on October, 28, 1924 to Sally and Gordon Sehon of Tom, Oklahoma. She spent her younger years in the Tom area, graduating from Tom High School.

After high school she moved to Tulsa, OK to work in a plane factory where she was the original “Rosie the Riveter” putting on the bombardier doors. She loved living in a large city with a bunch of girls. She had an appendicitis attack and after the hospital stay, her Momma came to get her and took her back to Tom. She got a job in Dekalb, Texas working at a drug store. Her brother Roy Lee invited her up to stay with them in McAlister, OK, which she gladly accepted.  While there she met her lifelong love, Carl Deviney. Their courtship was fast as he was to ship out to the Pacific Theater in WWII. They dated for 2 weeks and were married on June 30, 1943, at St. Joseph’s Parish in Clarksville, Texas.  After the war, Carl went to work in a garage as an auto mechanic.  Momma had given birth to Brenda Ruth a short time after Daddy had shipped out.  They then had Carolyn Ann two years later and then added two more babies to the family. They lived all over the state of Texas living in Ft. Stockton, Levelland, Morton, Odessa and Lindsay, Ok. And bought a home and lived there for 4 years. Then they were transferred to Shiprock, NM, Waterflow, NM, and Kirkland, NM before moving to Cortez, CO. They stayed in Cortez for four years before moving to Baker, MT where they lived the rest of their lives.

Ruth being a petite woman was anything but delicate. Growing up she learned how to work hard and take pride in that work. Ruth’s greatest  achievement was the family she and Carl raised and the home she kept,  as it was always clean, never were pans set on the table, ironed all sheets and dishtowels, sweet tea served at meals and always coffee on in the afternoon. Granny was known for her famous homemade rolls, they kept her kids, grandkids and great grandkids showing up often and they never left disappointed. She was always quick to “giggle” like only she could. Granny was a lover of babies and relished in any time her family could give her. Many episodes of Wheel of Fortune where watched with her family over dinner and in her day she was hard to beat. At almost 98 she got up every day dressed, put her shoes on and was ready for what the day had to offer. On Sundays she would dress up and attend the Community Church where she developed a fellowship with many over the years.

To order memorial trees or send flowers to the family in memory of Ruth Deviney, please visit our flower store.