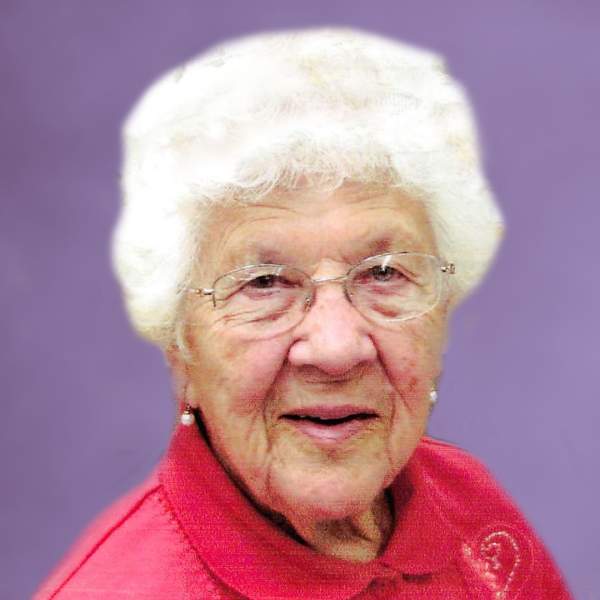 Ruth Esther Sackman was called home to be with her Lord and Savior on April 19, 2019 at the Prairie Community Nursing home in Terry, Montana. She was blessed to be able to spend Easter with most of her family in heaven after celebrating her 100th birthday in March.


Ruth was born one of ten children in Marsh, Montana on March 4, 1919. She was the daughter of John and Magdelina Meidinger. Ruth grew up and attended the Sackman School and then the Terry High School where she graduated in 1939. After graduation, she traveled to California to work as a secretary on a Naval Base. She soon became homesick for Montana (Andy) and transferred to the Gore Hill Army Base in Great Falls.


Ruth married Andrew Sackman on November 20, 1945 and moved to a farm six miles north of Mildred, Montana where she worked along side her husband raising cattle and grain. To this union, five children were born. Lyle, Lotty, Loren, and Leita. Lynn was born in 1949, but the Lord took him home at just three weeks of age. Ruth also lost her beloved husband at a young age and was left to raise four children, ages 2 to 16, which had to be quite a challenge. With the help of faith, family, neighbors, and friends, she persevered. She stayed on the farm until 1968 when she moved to Terry.


Throughout her life, Ruth was a member of the Fallon Evangelical Church, and later attended the Terry Wesleyan Church. She was active in many organizations such as the Terry Homemakers Club, the Hospital Guild, Ladies Aide, Bible Studies, and Red Cross Coordinator. She cooked at the Prairie County Manor for many years.


She was a faithful member of the” Prairie Chicks”. This group of Terry ladies would enjoy gathering for coffee, lunch, or Friday evening dinners. She loved gardening, sewing, and canning. She spent many evening hours crocheting table cloths and doilies for her family. Earlier, she spent time sewing shirts for her sons and dresses for her daughters. Ruth was also the Church Weed Control Officer, making SURE there was never a weed in sight. She also took care of some of her grandchildren before they attended school.


Ruth is preceded in death by her husband, Andrew, and her sons, Lynn and Lyle, and a son-in-law, Fred. She is survived by her daughter, Lotty Rambur of Terry; son, Loren (Phyllis) Sackman of Dickinson, ND; daughter, Leita (Lyle) Zimmerman of Red Lodge; and daughter-in-law Vera Sackman of Fallon. Ruth has one remaining brother, Norman Meidinger of Powell, WY. She has six grandchildren, thirteen great-grandchildren, and numerous nieces and nephews.


Should friends desire, memorials may be made to the Prairie County Hospital Foundation, Fallon Evangelical Church, or the Gideon Bible Organization.

FUNERAL SERVICE: Wednesday, April 24, 2019 at 2:00 p.m. at the Fallon Evangelical Church in Fallon.
VISITATION:Tuesday, April 23, 2019 from 1:00-6:00 p.m. at Stevenson & Sons Funeral Home in Terry.
To order memorial trees or send flowers to the family in memory of Ruth Sackman, please visit our flower store.