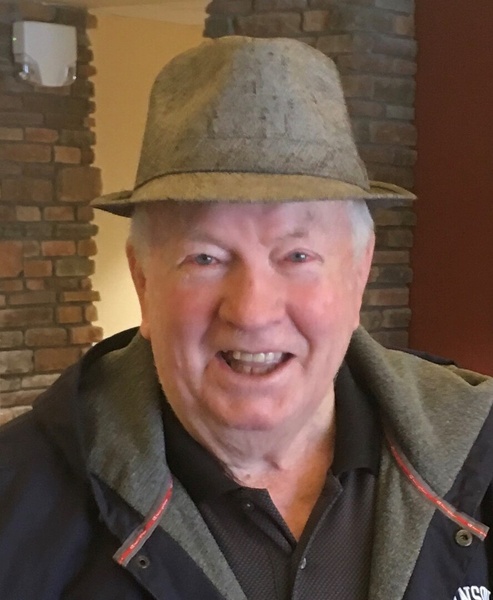 A memorial gathering will be held in the backyard of 1071 5th Street West, Dickinson, at 11:00 a.m. on Saturday, July 25, with a graveside service preceding the memorial service at 10:00 a.m. at St. Wenceslaus Cemetery. Dress is casual. Lunch will be provided at the memorial gathering. (Please bring a lawn chair if you have one, but come even if you don’t as some seating will be provided.)

On January 30, the world became a less interesting, colorful, and entertaining place, when Alex Easton left it, taking one of the greatest laughs on the planet with him.

Theodore A. Easton, known everywhere but his beloved Dickinson, ND (where he was “Ted”) by his middle name Alex, was appropriately born in a Beulah, ND, house that had previously been a mine shack and would later become the golf course clubhouse. His mother was a longtime teacher in one-room and other western North Dakota schools. His father was a coal miner, one-time golf course builder, and Prohibition-era bootlegger who used his weekly trips to Bismarck to sing live on KFYR radio as cover for transporting moonshine to thirsty miners in Beulah to help pay expenses for his family. [He also had a distinguished career as the North Dakota State Mine Inspector, but who could leave out the bootlegging angle?]

Sports were a big part of Alex’s life, as a child and then at St. Mary’s High School in Bismarck, ND. In his years at what was then Dickinson State Teacher’s College, he was on the varsity football, basketball, track, bowling, and golf teams, though he voluntarily gave up a spot on the varsity tennis team so a friend would have the chance to play. Sadly, baseball did not start at Dickinson State until the year after he graduated, so he obviously had a lot of free time in the springs, with a mere two sports to manage simultaneously.

As he left school behind, golf became his sports passion. On two separate occasions, he beat Olympic gold medalists in golf matches. [Both were Winter Olympians, but still!] He won many a sand greens and other small-town golf tournament in Nebraska, Wyoming, and North Dakota. Facing almost certain defeat when down two holes with only two holes to go in the City Golf Championship match in Thief River Falls, Minnesota, he turned to his caddy, his daughter Julie, said “We’ve got him right where we want him,” then proceeded to win the next two holes to tie the match, then the first extra hole to win the title. Before leaving the topic of sports, it should be mentioned that, as a young man, Alex once went two for two (two singles) against Hall of Fame pitcher Bob Gibson. The details make for a great story, but there is insufficient room for them here.

Alex married Zona Walker, his Bismarck St. Mary’s High School sweetheart, between his junior and senior years at Dickinson State. Daughter Lili Jo arrived a year later in Bismarck, just after his Dickinson State graduation. At the end of his first year of teaching, at Pasco, WA, son Steve entered the picture. A few years later, when Alex was pursuing a master’s degree at the University of North Dakota while also juggling teaching and coaching work at Bismarck St. Mary’s, daughter Julie arrived in Bismarck. When Alex left St. Mary’s to become a counselor at Rock Springs, WY, High School, daughter Wendy arrived, completing the family.

The family became close through several moves related to Alex’s career advancement, many trips in an overcrowded and often barely functioning station wagon, and several side trips along the way to pursue further education. Alex pursued graduate studies at UND, the University of Texas, and Springfield (MA) College before completing his Doctorate in Education at the University of Colorado. After his stint in Texas, Alex had a distinguished career in community college administration. He was eventually the president of community colleges in Scottsbluff, NE, Thief River Falls, Fergus Falls, and Brainerd, MN, and Berlin and Laconia, NH. He made every one of them better, then, per his philosophy, when he had done what he could he moved on so someone else with a different skill set could do even more. Thousands of students, and their instructors, benefitted from his unbridled enthusiasm for community college education.

Alex was one of those rare folks who lit up a room simply by entering it. With the exception of a couple of bosses whom he stood up to in defense of his community colleges, pretty much everyone he met instantly liked him and continued to like him. He had a wonderful sense of humor and great appreciation for a good joke—especially if was slightly (but only slightly) improper.

His laugh was legendary. When he would visit his brother Gil in Bismarck, there was often a group of teenaged young women who gathered on the porch, just outside the window of the couch he occupied. After observing this several times, he asked his niece, Pinky, if her friends always gathered on the porch. “Not really,” Pinky replied, “but they love to hear you laugh so they always come over when you are in town.”

After his community college career, Alex retired first to Florida, then to Dickinson, and in the past few years to Laramie, WY. His grandchildren and, recently, great grandson, were the joy of his last years. During the last months of his life, he received superb care from the nurses and nurse assistants at Hospice of Laramie. He died peacefully, with his grandson Tedder at his side.

He was preceded in death by his parents, his brothers, and his granddaughter.