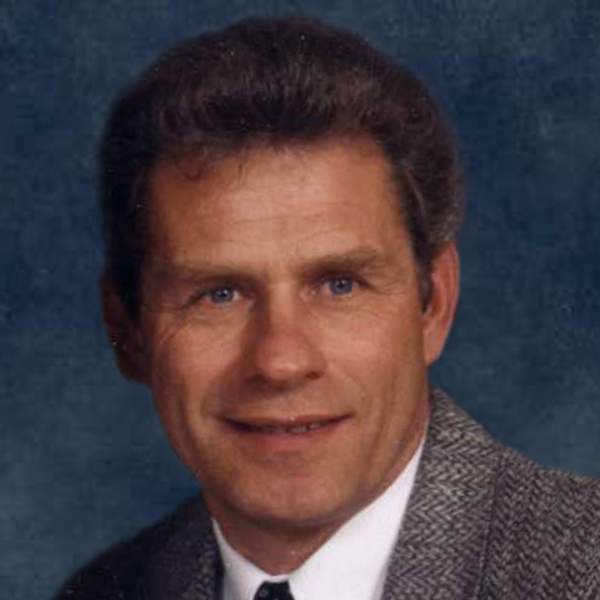 
Vern passed away peacefully at his home in Bismarck on Wednesday, April 24, 2019.


Vernon Frank Mayer was born on January 9, 1945, on the family farm in Regent, ND to Joe J. and Rose (Harle) Mayer.  As a young boy, he enjoyed life on the farm, antagonizing his older sisters, Irene (Sr. Rebecca) and Arlene (Sr. Rachel), and building things with his brother Clifford.  He attended St. Vincent’s in Mott until second grade and then attended St. Mary’s boarding school in New England, graduating in 1963.  He boarded the train with one small suitcase to attend Gonzaga University on a trumpet scholarship, where he finished his mechanical engineering degree.  He went to Iowa State in 1967 where he met and married the love of his life, Barbara Ewald, on August 31, 1968 at St. Thomas Aquinas in Ames, IA.  He was a professor in the Mechanical Engineering Department at Iowa State University.   He finished his PhD in metallurgy there in 1974.


Todd Christopher (1969) and Allison Elizabeth (1973) were born while he was in grad school and the family moved to Pittsburgh, PA in 1974 for his first job at the Alcoa Research Laboratory.    Joel Ewald (1975) was born there.  When his parents retired, Vern decided to give up his career and city life to take over the family farm in 1976.  His love of the land, his desire to raise his family on the farm, his faith, and his passion for music proved to be the guiding principles and the driving forces in his life.


Vern was very active at St. Henry’s in Regent in the music ministry, as a Eucharistic minister, and as a confirmation leader.  He enjoyed participating on several government agriculture advisory boards over the years as much as he enjoyed visiting with other farmers in line at the elevator.  He found many ways to stay active in music, teaching himself the guitar and being part of Dakota Gold, playing guitar, saxophone, country fiddle, and the trumpet, as well as singing for many wedding and anniversary dances in the area.


Vern and Barbara enjoyed running their Bed and Breakfast for pheasant hunters for 26 years with the Cannonball Company in Regent, sharing their love of the land with people from all over the world, even though Vern had never shot a pheasant. Vern retired from farming in  2006 and grew to enjoy a new life in Bismarck, with many weekends spent taking care of the farm that he loved.


Vern loved to be active, and especially as he transitioned into consulting engineering after retiring from farming, he rediscovered his passion for cycling.  In grad school, he was known for riding his bike to campus when the University was closed for a snow day.  He completed many long distance rides all over the United States and loved riding daily for exercise.


Vern treasured his daughters-in-law Peggy (Todd) and Sasha (Joel) and his son-in-law Jerry (Allison) as his own children.  His grandchildren Joe, Sarah, Jalen, Avery, Gavin, Chase, Eli, Masha and Anna were his pride and joy.  He always looked forward to time with family: teaching and learning new skills, playing music together, and sharing his knowledge… he always made it fun.


Vern was a devoted husband, father and grandfather.  He loved watching his children and grandchildren compete and perform, from the familiar basketball, football and volleyball to developing new loves for Ukrainian dance, drum corps and soccer.  He didn’t hesitate beating anyone, including his grandkids, in cards, cycling or running, and did all of it humbly and with a sense of humor.  He and Barbara enjoyed traveling together for cycling, visiting old and new friends and family, and attending cultural events.


Grateful for having been loved by this kind man are his wife, Barbara; his children, Todd (Peggy), Dickinson; Allison (Jerry Bell), Plainfield, IL; Joel (Sasha), Richardton, ND; his grandchildren; his brother Clifford (Karen), Oxnard, CA; Barbara’s extended family, and many nieces and nephews.  Vernon was preceded in death by his parents, Joe J. and Rose (Harle) Mayer; and his sisters, Sr. Rachel and Sr. Rebecca.


In lieu of flowers, please consider donations to The God’s Child Project or Ministry on the Margins.