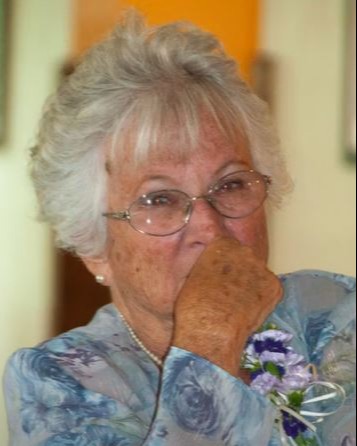 Vicki was born in Camden, New Jersey on July 29, 1936. She grew up in Upper Darby, Pennsylvania, a suburb of Philadelphia, with her father, John Pharoh Armor, her mother Nan Douglas Armor, and younger brother, Jan Armor.

Vicki married John Posdon in 1965. The couple would move to and raise their family in Dover, Delaware. Vicki & John retired to her childhood summer home in Ship Bottom, New Jersey in 2006.  She would reside there until 2017 when she moved to Dickinson, North Dakota to reside with her daughter, Amy.

From childhood, Vicki loved the white sandy beaches of Ship Bottom.  It was her favorite place in the world. She enjoyed summers with her family and friends in Ship Bottom her entire life.

Vicki loved reading books, often on the beach or under an umbrella in the back yard. There was always a cold fountain Coca Cola by her side. The Philadelphia Eagles were her favorite football team.  She never missed football Sundays.  But anytime of the year she could be seen wearing her Eagles shirts.

Family, life-long friends, and new friends made along the way were the center of Vicki’s life. She provided unwavering support to her children and cherished her family including her brothers, numerous cousins and in-laws, their spouses, and their children. She made fast friends with many of those she encountered and easily endeared herself to them.

Vicki’s husband, John, passed away prior to her death. She is survived by her 4 children, Leslie Heck, Scott Hazel, Doug Posdon and Amy Olsen, her grandchildren Scott and Victoria Hazel, Jeremy and Jacob Posdon, and Nallie and Missy Olsen.  She has one great grandchild, Ian Hazel.

She will be laid to rest with her husband at Brigadier General William C. Doyle Veterans Memorial Cemetery in Wrightstown, New Jersey.

Vicki touched everyone with her kindness and joyful personality. She will be remembered and celebrated with delight and love.

To order memorial trees or send flowers to the family in memory of Vicki Posdon, please visit our flower store.