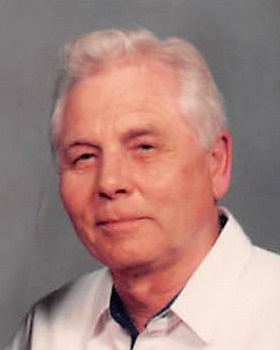 For those unable to attend the mass, the service will be livestreamed below this obituary.

Walter was born July 26, 1927 in Glen Ullin, the son of Joseph A. and Constance (Boespflug) Fitterer.  He attended country school and the State School of Science in Wahpeton for two years, graduating from the Mechanics program. Walter was drafted into the United States Army on February 20, 1946. He served overseas in the Philippines on the South Pacific theater operation and was honorably discharged on July 12, 1947. On July 7, 1952, Walter married Jeannine Hermes in Glen Ullin.  To this union, Daryl and Keith were born.  Walter took over his father’s business, “Fitterer Implement” in 1962, and spent most of his life as a farm equipment dealer.  He enjoyed collecting all types of toy tractors, having collected over 600 throughout the years. He also enjoyed bowling and sponsored a bowling league. Walter was a member of the Knights of Columbus and Lions.

Walter was a member of Sacred Heart Catholic Church and the K of C of Glen Ullin.

He was preceded in death by his parents and infant brother Wilburt, sisters-in-law, Millie Fitterer and Maureen Stinson.