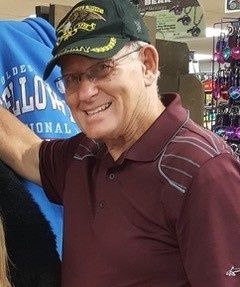 Wayne was born on July 25, 1947 to Edward and Elizabeth (Marcinack) Susa in Beach, ND. He met and married Betty L. DaMoude from Nelson, NE on June 9, 1973. They raised two children, son Derek and daughter Jolene.
A Vietnam veteran, Wayne served in the US Army from 1966 through 1969 achieving the rank of E5. He operated Susa Lumber Company, alongside his father from 1969 to 1986. He and Betty purchased their first floral shop, in Baker, MT in 1974 and Wayne found his true calling. In 1987 they purchased Scott’s House of Flowers in Moscow, ID and moved the family west. Wayne will be fondly remembered by the many residents of Moscow, Pullman and surrounding areas for his beautiful and artfully designed floral arrangements. He received many accolades for his thoughtful wedding and funeral pieces. Wayne was passionate about his yard and property. His beautiful flowers and trees kept him busy from spring to fall each year. He loved camping, mentoring and playing with his two granddaughters, Carissa and Kasey. A lifelong member of St. Mary’s Catholic Church, Wayne was also a member of the Knights of Columbus and frequently served as a greeter for mass.
Wayne was preceded in death by his father Ed and mother Elizabeth; sister Leona Osmond.
He is survived by his dear wife, Betty, of 47 years, along with his son Derek (Nikki) of Colorado Springs, CO, and daughter Jolene of Moscow, ID, granddaughters Carissa and Kasey, sister Rose (Ron) Marie Johnson of Longmont, CO, sister Dorothy (Darren) Smith of Zahl, ND and brother Eddy (Carleen) Susa of Baker, MT, along with numerous aunts, uncles and cousins.
Memorial donations in memory of Wayne can be made to the Knights of Columbus, 618 E. First St., Moscow, ID 83843.
To order memorial trees or send flowers to the family in memory of Wayne Susa, please visit our flower store.