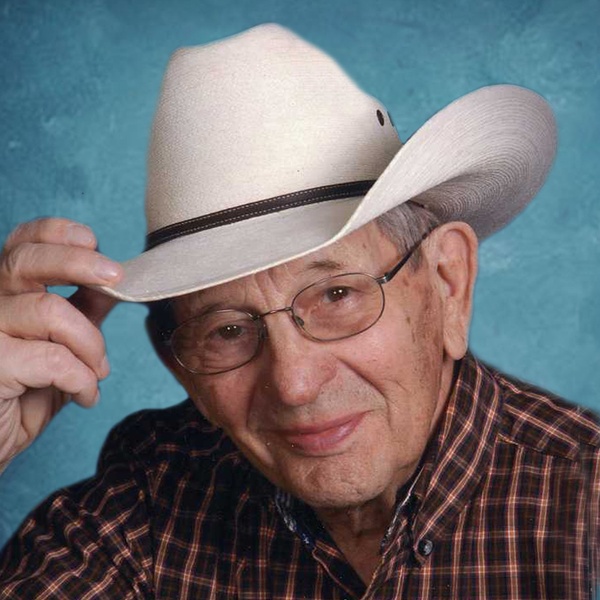 
Willard Schnell
, cattleman, horseman, cowboy, auctioneer, husband, father, and friend, was born in Dickinson, ND on June 11, 1928, to Ray and Clara (Kittleson) Schnell. He was the seventh child of thirteen, and always said that because he was the middle child, all of his older siblings were his bosses, and his younger siblings were his parents’ pets. He attended St. Patrick’s grade school, Dickinson High School, Dickinson State College, served in the ND National Guard, and lived his life as a member of the Catholic Church.


He was raised on a diversified farming and ranching operation near Dickinson, and also worked in many areas of Schnell family livestock auction markets.


In 1949, Willard married Swana Enderud of Watford City, ND, and to that marriage, seven children were born. Following the tragic passing of Swana in 1991 due to ALS, he married Linda Knapp, formerly of Dickinson, who was by his side to his last breath.


Willard learned the auctioneer trade at the age of 18, taught by his father, Ray, and brothers Howard and Robert, and continued his chant for almost seventy years. Over that time, he had a hand in selling over four million head of cattle, tens of thousands of horses, thousands of acres of land, and numerous other auctions including many for charitable causes.


In the Livestock Auction market industry, Willard was part of a family operation that operated facilities in Dickinson, ND, Lemmon, SD, and Miles City, MT, all at the same time. Then, starting in 1977, he and partners Larry Schnell, Armon Wolff, Delmar Erickson, and James Erickson, operated markets in Dickinson, Bowman and Beulah, ND.


When not working behind the microphone, he was heavily involved in rodeo, both as a contestant in four events, as well as a promoter and manager of a number of several high quality rodeos and cowboy lifestyle events, including the Bronc Riding Match of Champions, the Minot Indoor Rodeo, Miles City Bucking Horse Sale, and the Dickinson Teddy Roosevelt Rodeo, to name a few.


Willard loved western North Dakota and Eastern Montana, and the people. He especially enjoyed visiting ranchers, running pasture cattle with his friends on the reservation, spraying leafy spurge, and visiting his land on Killdeer Mountain.


Almost to his very last day on this earth, if you would have asked him how he was doing, he would tell you: “If I was doing any better, I’d have a runaway!” We believe he’s having a well-deserved runaway right now.